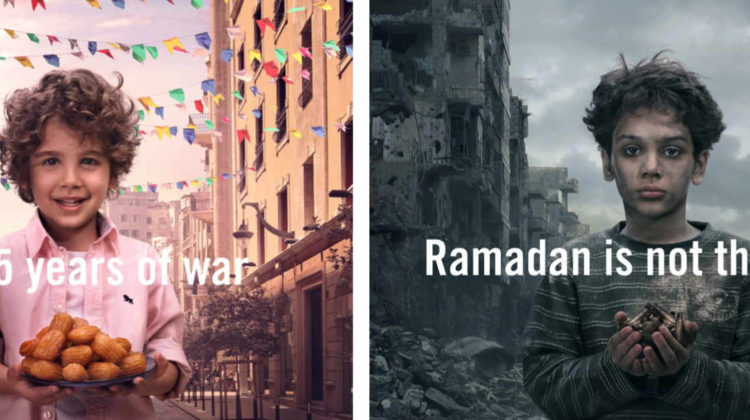 For the past five years, the flavor of Ramadan has not been the same for Syrian’s children. Schools and hospitals are continuously targeted, the conditions are extremely grim, children are unable to receive any humanitarian assistance and need access to clean water, food, medicine and basic necessities. This year during the whole month of Ramadan and as part of Facebook’s Hack for Good, Save The Children is launching this year a Ramadan campaign to remind people of the harsh realities that Syrian children are confronted to every day.

Save The Children is an NGO that believes every child deserves a future and works to give them a healthy start in life, the opportunity to learn and protection from harm. The campaign will run across the Middle East and North Africa and target Arab diaspora around the world.

Facebook created the Hack for Good to celebrate the talent of young Arab creatives and direct it towards a major social issue in the region. The Hack for Good competition took place during Dubai Lynx festival where UAE based students from around the region were invited in March 2017 to develop a Ramadan themed campaign that fits Save the Children’s advertising needs. The goal was to create an initiative that would gain rapid traction across the region and galvanize support.

A panel of leading ad agency executives and creatives selected 16 finalists from a group of 100 participating students. The judging panel included representatives from OMD, Cheil, Ogilvy Qatar, Leo Burnett, FP7 and JWT.   Students were divided into four teams comprising of four members each, and they were also assigned a creative mentor from one of the partner advertising agencies. Each mentor worked closely with the teams to come up with an idea for the campaign.

We always hear people complaining that Syria is often forgotten and that children are paying the price. I think a month-long campaign supported by Facebook will sure help shed the light on the harrowing stories of death and destruction targeting helpless Syrian children, and I sure hope this war will be brought to an end the soonest.

See Also:Tesla Launching in the UAE Next Week
Posted By Najib
Categories BALADI,SOCIETY

Emirates Hits Back at the US & UK Electronics ...